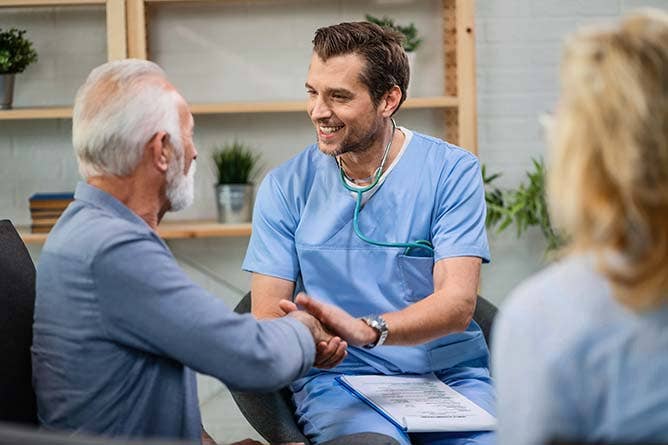 Nursing has a reputation for being a women-dominated field, but that wasn't always the case. When the first nursing school was founded in India millennia ago, only male nurses were admitted, according to Nursing Times. And because nursing was affiliated with other male-dominated fields, such as religious orders and the military, men's presence in the field remained steady until the 1800s. When men went off to fight in the Crimean War, however, women—Florence Nightingale the most famous among them—stepped in to fill the shortages in hospitals, according to History.com.

Since the 20th century, women have dominated the field, but with more men becoming nurses in recent years, the pendulum may be (slowly) swinging back again.

Male nurses by the numbers.

In 1970, men made up 2.7 percent of the nursing force, CBS News reports. The Washington Center for Equitable Growth says that figure reached 11.9 percent in 2011 and 13 percent in 2015. These numbers show a steady increase in the gender diversity of the field.

Many men are finding plenty of perks in the nursing field. The pay is good — the median wage for a registered nurse was $71,730 in 2018, according to the Bureau of Labor Statistics (BLS). Healthcare is also a reliably growing field as the U.S. population gets older. The BLS reports that nursing is projected to grow at a rate of 12% per year, much faster than average job growth.

Men come to nursing via various avenues. Andrew Nagel discovered nursing while serving in the U.S. Army, first as a combat medic and later as a licensed practical nurse (LPN). His experience revealed nursing's appeal as a career option after active duty. He's now pursuing his nursing degree at Western Governors University.

"Working as an LPN allowed me to see the positive impact on patient outcomes a person can make as an RN," he said.

Nagel also believes that the strong job market is drawing men to nursing in increasing numbers.

"I think the rising wages along with the job stability have certainly had something to do with that," he said. "Additionally, men providing bedside care in positions that are not MDs are more acceptable now than they once had been."

Mike Lewis, who's been an RN for 27 years, came to nursing after years of volunteering for emergency medical services during his career in finance.

"During the early years of my EMT work, I was encouraged by ER medical and nursing staff to consider a career in their fields," he said.

Lewis's nursing career made it possible to support his family while improving the lives of his patients. Many men follow a similar path to nursing in pursuit of job security and a more fulfilling career.

Nagel notes that his male peers are mostly drawn to emergency room nursing, but he has seen men in nearly all areas of nursing.

Lewis has noticed the same trend. "In my experience, most men choose the ER or ICU as career choices, as these units offer a higher adrenaline rush," Lewis agreed. "The pay rates are also generally higher in these areas."

Those experiences may allow nurses to advance into a more lucrative field such as nurse practitioner, EMS flight nurse, and nurse anesthetist.

Despite their increasing numbers, male nurses are still stigmatized.

"I think there are still some stereotypes that suggest men aren't able to be as caring as their female counterparts," Nagel said. "It's funny, but I still get referred to as 'doctor' by my patients. I think for some, they still feel uncomfortable referring to a male as a nurse, and in doing so will offend me somehow."

Because of gendered stereotypes, men are perceived as lacking the nurturing instincts that they think come naturally to women. Such stereotypes only serve to limit the field and the nurses in it. As more men enter the field, though, one can hope that those stereotypes will gradually begin to fade away.

Nursing is a multifaceted field with people of every gender achieving success in traditional and nontraditional roles. There's plenty of room for growth as the field moves forward, and male nurses will drive change as much as women will. In a field as important as nursing, the more gender diversity, the better.

How to become a flight nurse: duties and outlook.

Learn more about what a flight nurse does, how much money they make, and how to become one.

The role of nurses in an outbreak.

We need caring, well-trained nurses more than ever. This quick guide can help you stay safe and do your best work.

Learn the differences between the RN-BSN and RN-MSN programs and determine which one is the right fit for you.