How Teachers Can Keep Kids from Failing a Class 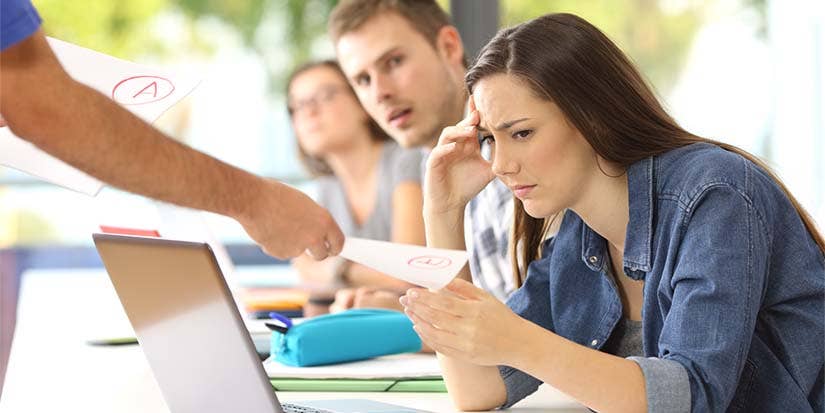 A little extra attention can keep some struggling students from failing a class.

Who's at fault when a student is failing a class: the teacher, or the student?

It's a trick question: failing a class isn't really about whose fault it is. No teacher I know hopes that kids fail, and no student picks failure as a goal. In truth, failure is usually a complex issue that involves the teacher, the student, their family, and the surrounding circumstances.

With the school year drawing to a close, some teachers might be faced with deciding the best course of action for students who are failing their classes. Should they try to find a way for kids to pass the course in the waning weeks of the school year? Or should they let kids face the consequences of not doing enough to pass the rest of the year?

Teachers know that it's best to intervene as soon as they realize that a student is struggling, to meet with the student and parents to identify problems and devise a plan. Maybe the student has a learning disability and should be referred for testing. Maybe an after-school job leaves no time for homework. Maybe family responsibilities interfere with attendance. Whatever the reasons, the teacher, the student, and the parents should be able to work together to get the student back on track.

Further Reading: A Teacher's Survival Guide to Student Absenteeism at the End of the Year

But what if you meet with the student and parents and nothing changes? What if you're already halfway through the year before it becomes clear that failing a class isn't just possible, but probable?

As much as they might like to, parents can't always fix a child's academic problems, especially as kids get older. This is when teachers might try to forge a stronger relationship with a struggling student. Maybe they speak to the student every day and urge them to come to class; maybe they offer extra help after school or during lunch. Whatever their words, they send the message that they see the student and are there to help.

It's not always easy to reach out to a kid who's been uncooperative, who's frequently absent, or who doesn't seem to care. But individual attention can have positive effects. And it's worth a try, because failure can easily become a habit.

The Consequences of Failure

Failing early in high school can significantly influence a student's decision to drop out. According to the journal Education Digest, ninth graders have the lowest grades, miss the most classes, and are more disruptive than any other high school grade. The new school environment can be academically and socially challenging for ninth graders, and the physical and emotional changes they're undergoing only add to that stress.

Ninth grade can set the direction for the rest of high school. Failing a class—or failing multiple classes—in the first year or two can put kids far behind the number of credit hours they need to graduate. If kids begin to think they'll never catch up, they might just drop out.

Dropping out can have dire consequences. Columbia University's Teachers College found that dropouts will cost the country billions of dollars a year in lost income taxes, increased welfare, and health care, according to the Los Angeles Times; it also found that dropouts die nine years earlier, on average, than high school graduates. And dropouts are more likely to be incarcerated—the U.S. Department of Justice reports that 68 percent of state prison inmates don't have a high school diploma.

Some kids will make up a course during summer school; others might repeat a course the following year. But these options might not be available to every student.

Every teacher knows kids whose individual circumstances have stunted their progress. There's the kid who comes every day and does the best they can but still isn't passing. There's the kid who was absent a lot but really only needs to complete the work they've missed, not take the whole course over again. There's the kid who was sidetracked by a family crisis or personal illness but, with some help, might be able to make up a lot of the work before the year ends. If you look at the students you teach, you'll probably find some who could greatly benefit from a little intervention as the school year winds down.

So I give these kids one more chance.

I identify the essential skills and understandings that these students must have at the end of the course and the tasks they need to complete to acquire them. The key words here are "essential" and "necessary"—I'll simply ignore some assignments. I'll draw up a contract and have the student and their parents sign it. And so long as the student finishes the required work and passes the required tests, I'll give them a passing grade.

Undoubtedly, some will say that helping some kids pass by modifying requirements at the end of the year isn't fair to the kids who showed up every day and did the work. But treating kids fairly doesn't necessarily mean treating kids the same. No student has ever wished that they could be the one who has to sign a special contract and make up weeks of work as the school year winds down. No kid ever wished to be sick, to have a family crisis, to lack parental support, or to do their best and not have it be good enough.

Further Reading: Don't Wait Until It's Too Late: How to Intervene with Struggling Students Early

In any given year, I might be able to keep a few kids from failing. Try as we might, teachers can't guarantee success for every student. But if we go the extra mile and focus not on what a student should have done but what they need to do to get through the course, their chances of getting a diploma on time might significantly increase.

It's worth a shot.