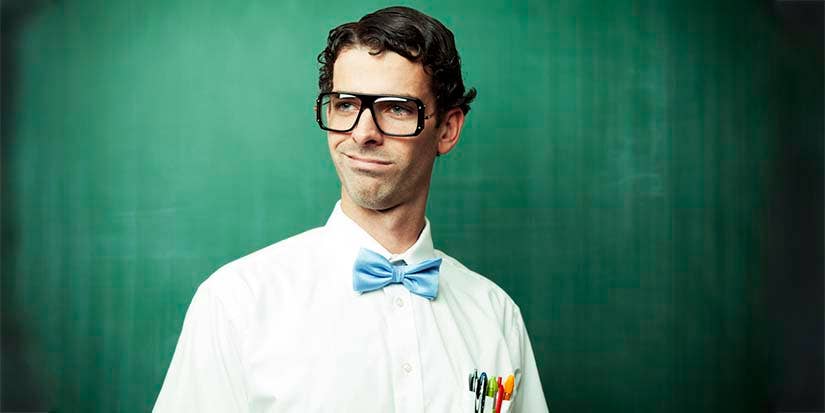 It wouldn't be back-to-school time for teachers without the administrator's annual staff orientation!

Stop and think about all the strange new school year rituals that only teachers understand. We put tennis balls on the bottoms of our chairs and follow building procedures that revolve around granting passes to use the restroom. The ways we prepare for a new school year are odd—especially when witnessed by an outsider.

While a good sense of professional development humor is a must when looking at some of our back-to-school rituals, a keen sense of observation and insight can go a long way, too. Here's a look at our new-school-year habits from the lens of an anthropologist's field observation notes.

Further Reading: Read this Letter on Your First Day As a Teacher

There is no echo in this uncannily large room, which is filled with antiquated seats and dusty curtains. The space is designed to host more than the small group that has currently gathered, but despite the expanse, those in attendance have created one cluster in the front center of the room. Most of the seats are empty.

One of the several doors behind the seating area opens quietly, ushering in a single ray of natural light, then swings shut with an unexpected bang. The attendees turn their attention to the woman who has entered, the last to join the group. She feels their glares burning into her, so she quickens her gait—causing the three bags hanging haphazardly from her shoulder to collide with her hip in an uncoordinated dance.

A middle-aged man, who had been standing to the side of the room with others, slowly makes his way to a raised platform situated in front of the seating area. His booming voice reverberates around the room, jarring some of the attendees. He is the people's leader.

"Welcome back to a new school year," he bellows.

The leader communicates information pertaining to the attendees' daily tasks for twenty-six minutes and forty-two seconds. During this time, there are observable differences in the ways the attendees receive this information.

Some show signs of disengagement. One uses two long sticks to weave strands of yarn together. Another slouches from his upright position and closes his eyes. He seems to be focusing on the audible portion of the presentation.

Others appear to be performing the very tasks about which the leader is speaking: preparing for impending responsibilities, collaborating with others in the group, and providing prompt responses to electronic inquiries.

Still others are fixated on the leader, transcribing all his words.

When he ceases his transmission of verbal information, the leader steps off the raised platform. He is replaced by another man, who transforms a blank black monolith behind him into a blinding screen of white light. On the screen are the words "Migrating Our Email Server."

These words seem to cause much turmoil. There is an audible groan. The white screen displays pictorial messages that instruct attendees of the implementation process for this new procedure.

After thirty-six minutes and many interruptions regarding audience confusion, a man who hasn't previously interacted with the group takes his place on the raised platform, silently looking at the attendees. The woman with the two long sticks and yarn doesn't seem to notice.

This man disseminates massive quantities of data. The white screen displays colorful images; they seem to be visual representations of the data in a primitive form of graphs, charts, and numbers. The man seems appreciative of this data, and the attendees are pleased. When the white screen content changes, so, too, do the images on it. The man does not appreciate this new data; the attendees are displeased.

The man who is again listening with his eyes closed, opens his mouth as if to speak, but emits a low guttural noise instead. Those located near him seem to find delight in this, but they stifle their expressions and avoid looking at one another for several minutes.

Finally, attendees exit the dark room and arrive at another sizable space. Each one joins a predetermined assigned sector, where pieces of paper with titles such as "Brain-Powered Strategies" and "Problem & Project-Based Applications" are waiting. There is a period of silence as the attendees give their attention to the handouts. Some take notes in bound books meant solely for that purpose; others idly create unrelated illustrations in the margins of the handout.

When the leader and his helpers approach the groups, discussions intensify. The attendees point to specific passages in their texts; clearly, more confusion has erupted.

Further Reading: 8 Essential Teaching Tips from Someone Who Has Seen It All

Once the leader is satisfied the attendees have digested the text and provided additional information pertaining to their assigned topics, he announces that this portion of annual ritual of the pedagogical professionals is complete. Most attendees exit the building; some remain in smaller, hotter rooms that have been assigned specifically to them. All are instructed to return at a previously agreed upon time.