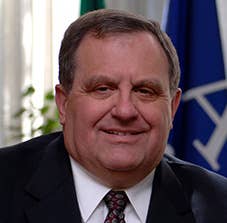 To honor Don Brunell’s significant contribution to the economic vitality of our state, support for education and military service, WGU Washington is proud to offer the Don Brunell Tribute Scholarship. The scholarship is available for members of the military community who wish to earn a bachelor’s or master’s degree in business, education, information technology, or healthcare.

For the past 28 years, Brunell has overseen the state’s oldest and largest statewide business organization. As president of the Association of Washington Business, he has worked closely with the State Board for Community and Technical Colleges and was named to the Washington State Advisory Board for WGU Washington in 2011. He has also served his country: Brunell served in the U.S. Army as part of the Special Forces and retired as a major in the Washington Army National Guard. Brunell retired at the end of 2013, marking a distinguished career in business and the military.

WGU Washington is proudly dedicating scholarships, each valued up to $2,000, for military personnel, retired military, veterans, and military spouses in Brunell’s name.

This scholarship will be credited to your account at the rate of $500 per six-month term, renewable for up to four terms.

Interested in seeking this scholarship? The first step is to apply for admission.

Eligible degrees and programs for this scholarship

Before monies are distributed, the scholarship recipients must read the WGU Student Handbook and agree to and understand the academic progress, tuition, and refund policies. The student will also be required to agree to the WGU Scholarship Terms and Conditions before monies will be awarded. The student must also meet the university’s On Time Progress requirements to maintain scholarship eligibility. Each student can only be awarded one scholarship that is funded or administered through WGU during their degree program.