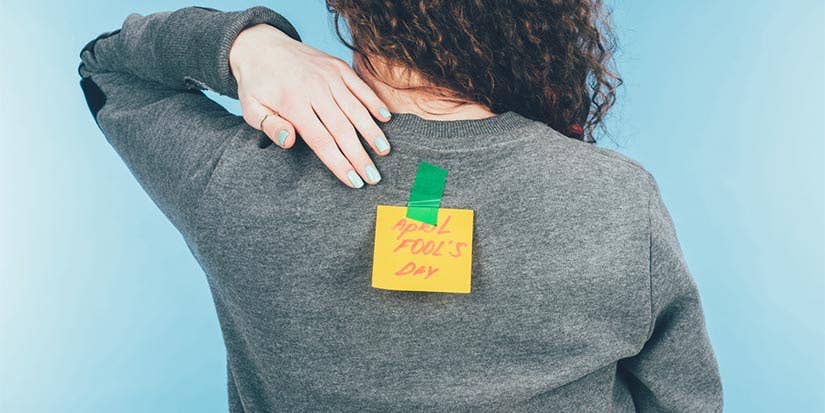 Turn the tables on your students this week.

Like most teachers, I dread April Fools' Day. What will the little tricksters do this year? Rearrange my room? Booby-trap my desk drawers? Hide a plastic rat under my desk chair? Teachers are often glad when 3 p.m. hits on April 1 and they've managed to survive unscathed. Last year, I decided it was time to turn the tables and prank my students on April Fools' Day. The result was an epic prank that I'll never forget—and I don't think my students will, either!

When planning an April Fools' prank as a teacher, it's best to get administration on board. When I decided on my joke, I went to my assistant principal and told him my plan: Since phones are always an issue in the classroom, I thought it would be funny to go a little ballistic and (safely) smash a student's phone when I saw it being used. I asked him what he thought and he loved the idea. He even provided the phone—an old model that had long ceased to work.

The prank needed to take place in my advanced placement English class. My students had worked hard all year long, so I wanted to give them a much-needed laugh. I also knew that these students could handle a joke that involved smashing up a phone. If you have younger students, I wouldn't recommend going for this type of prank. You should always make sure your April Fools' trick is age-appropriate.

Look at this: Less than $6,500 a year for your teaching degree

Then I needed a co-conspirator within the class. I went right to Amina. She was the perfect choice because she frequently had her phone out and she has a great sense of humor, so I knew she wouldn't break character. Amina and I worked out our plan. About 10 minutes into her class, she would take out her phone. I would grab it and go a little crazy, tossing it on the floor and stomping on it. Since my students had never seen me lose my temper in this class, I knew they'd be sitting ducks.

When the day came, I decided not to videotape the prank. Videos can be misconstrued, and I didn't want to find myself going viral on YouTube! As planned, Amina brought out her (fake) phone and I went a little nutty. Fully in character, Amina yelled right back, telling me I was crazy! When I looked at the rest of my students, their mouths were hanging open in complete shock. One girl had her head down and was rapidly writing in her notebook. Another boy looked like he wanted to intervene, but he was too surprised to move. After only 30 seconds, I could no longer keep a straight face. I burst out laughing and shouted "April Fools!" The entire class started to laugh with me, and that laughter continued for a good 10 minutes. I had successfully become the pranker instead of the prankee.

That epic April Fools' prank became legendary at my school and students still talk about it. Most importantly, the joke released tension in the classroom and strengthened my relationship with my students. They appreciated my sense of humor, and we now have a story we'll share forever.

I've found that I'm not the only one who has used April Fools' jokes to strengthen relationships and create fond memories in the classroom. One of my colleagues, Asha, once told me a story from her senior year in high school. She and her friends got to school very early and Saran-wrapped everything in one of their teacher's rooms: desks, tables, clocks, books—everything! But the teacher got them back and ended up Saran-wrapping their locker locks. "They were the size of basketballs," Asha told me, laughing at the memory.

Both my colleagues Lisa and Dennis have pranked their students by giving them a fake test. The test's directions told students to read all the questions before responding, and the last question said not to answer any of the questions. After about 20 minutes of watching his students ignore the instructions and actually take the fake test, Dennis stopped them and asked someone to read the directions out loud. He then yelled "Happy April Fools' Day!" That prank was not only hilarious—it also stressed the importance of always reading the directions!

Even elementary school teachers and principals like to play tricks on students. My friend Tara teaches 5th grade, and one year, she cut a bunch of Es out of brown paper, put them in a tray covered in tinfoil, and told her students she made them brown-Es. The principal at my friend Tom's school even pranked their entire school by announcing over the intercom that spring break was canceled so the students could focus on preparing for the state test. (That one would have scared me!)

Making the most of April Fools' Day jokes in the classroom can relieve stress and help create long-lasting memories. I believe they go a long way in building relationships and creating solidarity in the classroom. You've got some time to work on your ideas for a fun April Fools' prank in your classroom, but hopefully my stories will give you a little inspiration!