How to Make Grading Fair, Useful, and Efficient 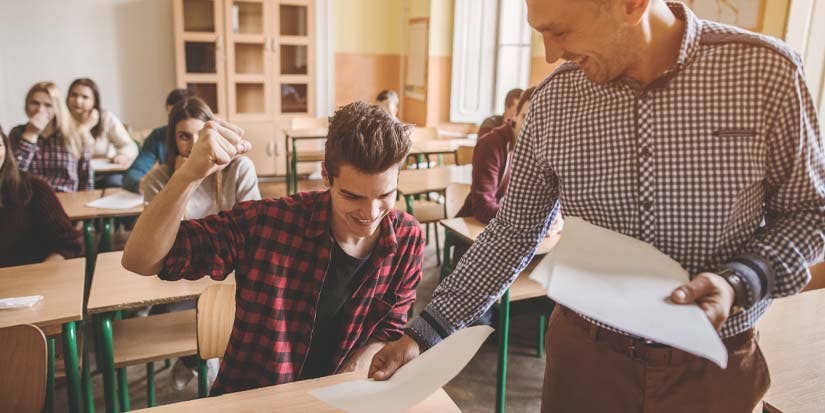 Grading is a big part of every teacher's life. It's so big that some teachers find themselves lugging home a book bag stuffed with papers every night.

But there are ways to make the process less overwhelming while still providing helpful feedback to students and parents. The secret is to keep firmly in mind what grades are meant to communicate.

The Purpose of Grades

During my first years of teaching, I graded everything. Tests, homework, papers, effort, and participation all factored into the 30 or so grades I averaged each quarter.

Further Reading: Should Failing Students Be Held Back a Grade?

It was common in this school to use grades as rewards or punishments. For example, some teachers allowed students to earn extra credit to improve their grade. Other teachers took 10 points off a paper every day it was late, so no matter how good it was, it wasn't an A.

I learned to do what my colleagues did.

Then I took a job in a different district. Here, teachers gave students not one but two grades every marking period. One grade was solely academic, the other was behavioral, including work habits.

The academic grade was based only on a student's achievement on tests, papers, or projects. The purpose of the grade was to show how well the student was progressing toward reaching academic goals or benchmarks identified by the district or state.

The grade for behavior was entirely separate and included effort, participation, cooperation, and attendance. Teachers could also add comments to a student's report card.

My teaching life became easier and my evaluations fairer.

Researchers at the Association of Supervision and Curriculum Development (ASCD) suggest evaluating only students' work that shows their academic progress. Here are some ways to do that:

In addition, researchers say what's on the final test shouldn't be a secret or a surprise. When students understand what they need to know, they are partners in the learning process.

"Students should not be graded for something that they are still learning," says middle school teacher Tyne Brack, writing for Maneuvering in the Middle. Teachers should grade only what is evidence of what students have already learned, she says.

Brack describes evaluation as "tedious and time-consuming," and that's only the beginning, she says. You have to enter the grades in the book. You have to keep track of who was absent and who needs to redo the assignment. You have to return papers in a timely manner so they're still relevant.

Instead, she says, give kids feedback, not grades, on homework. During class, go over it as an opening activity. Put the answers on the board, and let kids check their work. Students can write answers on a whiteboard and hold them up for you to see. Walk around and spot-check their assignments.

You don't have to collect it.

My new school district adopted these ideas, and I stopped collecting homework and drafts of essays. Students shared their writing with one another, asked peers for feedback, and made corrections. I sat in on sharing sessions. When students determined they had a final draft, they handed it in to be graded.

Giving students helpful feedback in class without collecting their work reduced the papers in my backpack even more.

But some teachers believe if they don't grade every assignment, kids won't do it. That's why teachers spend "endless hours grading student work and have grade books that contain far too many assignments," says Miriam Plotinsky, writing in Education Week.

Plotinsky, a learning specialist and veteran English teacher in Maryland, wonders if all these assignments indicate progress toward mastery or just time spent doing them. She also believes in accepting all late work but recognizes some teachers vigorously disagree with that policy. But, she says, "My job is to teach students to master skills and standards across content areas." If a student hands in a late paper, she explains, there's no penalty because it's punishment for behavior that has nothing to do with whether the student has acquired the skills they need.

ASCD researchers agree with giving students several chances to redo work and identified several "outdated" practices that should be changed. These include grading on a curve, which puts students in competition with one another rather than judging the work against a goal. Researchers also recommend not including classroom behavior in the academic grade.

The Future of Grades and Grading

Some teachers believe traditional grading is "inaccurate and inequitable," according to a report from the National Education Association (NEA). Many still support traditional systems, but some are rethinking what grades mean now—especially as students return to school with widely diverse educational experiences.

There is growing support for not confusing behavior with academic achievement. There is also support for collecting only final products, not homework. Giving kids more chances to learn the competencies they need is still not a widespread practice.

But in an interview for the NEA report, California English teacher Sarah Schopfer, who has adopted all of these changes, said, "As teachers, we should always work to do what is best for the kids. So the way I was grading did not feel good to me. This was not why I became a teacher."

As students return to school, now might be a good time to reevaluate how and what we grade.