3 Signs It's the End of the School Year 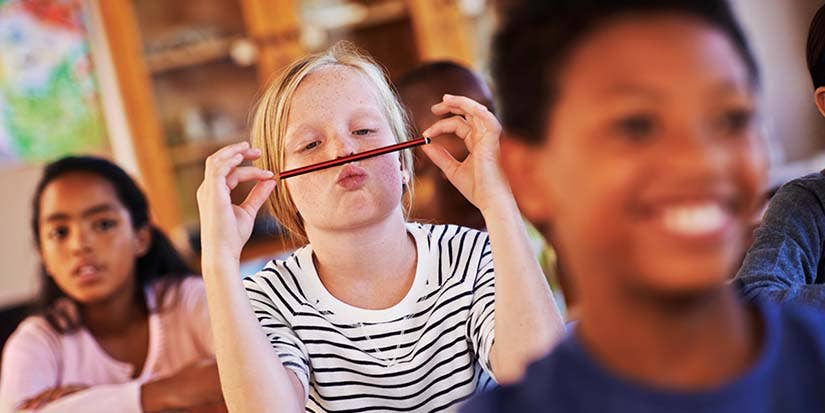 Your students are likely as ready for summer as you are. We're here to help you in the home stretch!

Educators can see the humor in just about anything. Being able to appreciate funny classroom stories is basically a prerequisite for the job.

But when spring comes around, humor disappears because we're all too familiar with the peril that comes with—shudder—the end of the school year. If you're wondering what the home stretch of the school year is like, let me break it down for you: it's the equivalent of a full moon on the day before Christmas break with unlimited access to ice cream sprinkled with Fun Dip.

On one particularly hot May day, 14 of my 23 students fell dead asleep and started drooling on the desks. One look at the thermostat and I realized why: it was almost 90 degrees in the room!

Heat does different things to different age groups. When it's hot, little kids zoom around the building as though they've chugged espresso. They're already constantly in trouble because they can't seem to keep their hands to themselves; rising temperatures only increase their mischief. Older students are the opposite: when it's hot, they move like slugs. The only thing that wanes more than their energy levels are their academic performances.

Eventually, I met my limit of refusals to do work or pick heads up off desks, and I ended up referring half of my sleeping beauties to the principal's office—where, incidentally, they enjoyed one of the few air-conditioned rooms in the building. #TeacherFail.

Luckily, there are some solutions to end-of-year behavioral problems. Setting productive, nonauthoritarian rules and letting students participate in the creation and management of those rules, Teacher.org claims, might lead to better-behaved students—and maybe even a #TeacherWin.

2. The Pleas for Extra Credit

Without fail, as soon as mid-May hits, absentee students and goof-offs suddenly realize that their lack of effort actually begets a lack of a passing grade. That's when the incessant pleas for extra credit start mounting. Relying on classroom humor only gets us so far; this extra credit stuff really grates on our teacher nerves.

I once had a student, Jesse, who missed an average of three days a week for four months straight. The school's attempts to motivate him were fruitless, and no matter how hard we tried, we couldn't reach his parents. Eventually, our most assertive attempts to reach the family proved successful, and Jesse's dad finally met with us, only to ask what we—not they—could do to solve the problem. Because teamwork makes the dream work, my colleague used her most saccharine voice to elucidate how much more successful Jesse would've been had he and his dad been active participants in his education throughout the year.

In this instance, her words fell on deaf ears, and extra credit quickly turned into regular credit. When this happens, you know it's the end of the school year.

3. The Struggle to Stay Awake

There's tired, then there's teacher tired. Teacher tired is already a special kind of tired, and it's only exacerbated by end-of-the-year chaos. The only remedy is that sweet sight of that last student leaving the building on the last day of school. Between finalizing grades, collecting books, and fighting the urge to spike our coffee, teachers can be hot messes at this time of the year.

Guilty of committing our own dress code violations, many of us forgo the tie during those final months rather than pass out in 90-degree classrooms. Some of us don't even waste time styling our hair or applying makeup. Then there are the unfortunate souls who are so exhausted that they inadvertently put a can of beer instead of ginger ale in their lunch bags. Mistakes abound this time of year, and being teacher tired only means that we make more of them.

Further Reading: 5 Tips to Keep Your Students Engaged at the End of the School Year

Look, we love our jobs and our students, but teachers know that the end of the school year is no joke. If you're looking for teachers during the month of May, you'll likely find us praying to the education gods, offering our planning time and our favorite staplers as sacrifices in the hopes that time will miraculously speed up. Yet much like our students' work ethic and our ability to stay upright, these efforts are seriously in vain.