Should You Let Students Listen to Music in the Classroom? 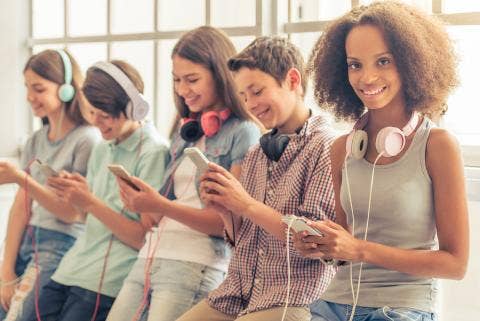 Music in the classroom helps some students concentrate, but may be distracting for others.

Deciding whether to allow students to listen to music in the classroom is a modern teacher's dilemma. Every single time students need to write an essay or work on a problem, they say, "Can I put my headphones on? I think better that way!" But is that really true? Does music help or hinder concentration? Is there a difference between listening to Bach vs. Lil Yachty, or Skrillex vs. Bad Brains? I know what my high school students say, but I wanted to find out what science had to offer.

Further Reading: How to Make Technology in Classrooms Effective and Exciting

Research offers little to back up the idea that listening to music improves concentration. In one of several small Taiwanese studies, 133 participants performed reading comprehension tasks while listening to either light classical music, hip hop, or no music at all. Students who performed the reading tasks in silence scored the highest. Music with a higher intensity (such as hip hop) was more distracting and had a greater (negative) effect on task performance and concentration.

There is a positive aspect to music's effect on work performance. Studies have revealed that listening to music leads to positive changes in mood, as well as increased creativity. In fact, in "music-listening work cultures," which students are certainly part of, there's actually a psychological withdrawal when the musical stimulus is taken away.

What the Students Say

Even so, it's hard to convince my students that music doesn't help their concentration. Taj, a senior, sees his music as his muse. "I wouldn't be able to concentrate if I were listening to music and trying to read," he told me. "However, when I write, I feel like music helps me concentrate deeply. I don't have writer's block. It's easy for me to put my words on paper."

"Maybe not with reading, but when it comes to math, listening to music definitely helps," Danela told me. "You could actually be singing along with what you're listening to and doing well in math."

My Thoughts As a Teacher

My own anecdotal evidence reveals that students see listening to music as a "reward." They refute the research that says that the brain loses focus when multitasking and they argue that listening to music helps them tune out distractions. When they listen to music when writing essays, my students usually begin working immediately and almost always hand in a product. But the question remains: Would that final product be better if the student was not listening to music?

This is an area begging for more research, especially as it applies to high school and middle school students. Our students have grown up using headphones daily, so the question remains whether a certain amount of adaptation would make results from today's teens different from the results of an adult or students from the past. For now, I don't think I'll completely ban music in the classroom; I'll continue to allow students to self-monitor and rock on.