About the Poll
Methodology
Resources
In the News

The 101: The Higher Ed Poll of Texas, commissioned by the nonprofit, accredited online university, WGU Texas, the Independent Colleges & Universities of Texas, Inc. (ICUT), and the Texas Association of Community Colleges (TACC) examines key public concerns and attitudes about higher education statewide. This year marks their second bi-annual collaboration and the first year to include insights about the pandemic and the digital divide. The poll was conducted by independent researchers James Henson, Ph.D. and Joshua Blank, Ph.D. of Strategic Research Associates, (SRATEX, LLC.)

WGU Texas is an online, nonprofit, competency-based university established to expand Texans’ access to higher education throughout the state. Formed through a partnership between the State of Texas and nationally recognized Western Governors University, WGU Texas is open to all qualified Texas residents.

Independent Colleges and Universities of Texas, Inc. (ICUT), a nonprofit association, is the voice for Texas' fully accredited private colleges and universities. For over 50 years, it has fulfilled its mission of helping policymakers recognize the importance and value of the independent sector of higher education by successfully articulating the sector's needs and aspirations.

They provide a common voice on behalf of member colleges during the Texas Legislative session and build relationships with state policymakers during non-session years. This voice promotes the sustainability of, and equity among, community college districts across the great state of Texas. To learn more,  tacc.org.

The 101: The Higher Ed Poll of Texas was conducted between January 4th and 11th, 2021. Respondents were randomly selected at the level of the household. The survey also employed a randomized cellphone supplement, with 61 percent of completed interviews being conducted among cell phone only or cell phone-dominant households. A Spanish-language instrument with bilingual interviewers offered respondents a chance to participate in English or Spanish. On average, respondents completed the interview in 17 minutes. Eight hundred interviews were conducted between January 4th and 11th, 2021. The final data set is weighted by race/ethnicity, age, and gender to achieve representativeness as defined by the Texas State Health Department’s population projections for the 2018 Texas Adult Population. The overall margin of error for the poll is +/- 3.46 percentage points. The survey was designed and conducted by public opinion researchers James Henson, Ph.D. and Joshua Blank, Ph.D., SRATEX, LLC.

of Texans agree that having a degree or certificate beyond high school is important.

say that they need more education and training to get the job or career that they want.

of Texans agree that it is essential to have an educated workforce if Texas’ economy is going to compete with other states.

or 1 in 3 Texans report purchasing new equipment to continue to work or go to school during the pandemic. 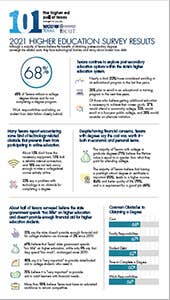 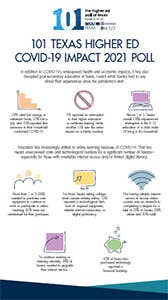 Addressing the Impact of COVID-19, access to technology and Internet/Broadband.